Today, 17 years turns since Dzmitry Zavadski disappeared; no body has been recovered, no full points in the criminal case 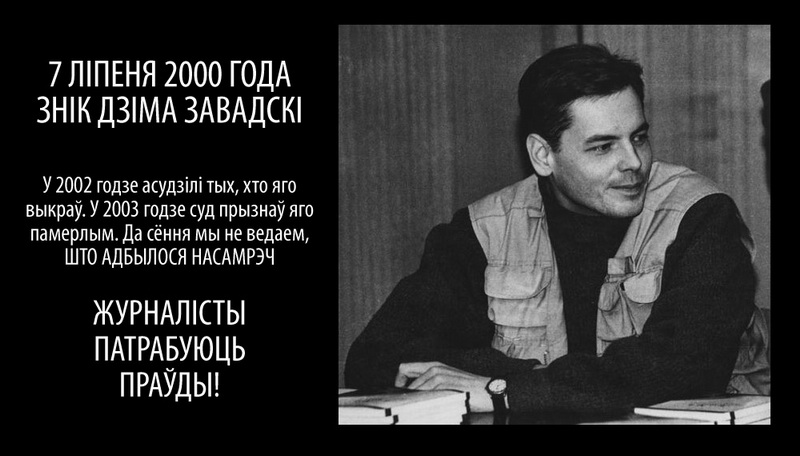 In July 1997 he and ORT reporter Pavel Sheremet were arrested for filming a report about the vulnerability of the Belarus Lithuania state border. Zavadski covered the second Chechen war in 1999.

TV cameraman Dzmitry Zavadski disappeared on 7 July 2000 when he was supposed to meet Pavel Sheremet at the airport in Minsk. He was last seen at the airport shortly before Sheremet’s flight arrived from Moscow and his car was later found locked and parked outside the airport. Like opposition leaders Viktor Gonchar and Yuriy Zakharenko who had disappeared a year earlier, Zavadski received threatening phone calls for several months before his disappearance. Zavadski’s body was never found, but he was officially declared dead three years after his disappearance. Four men were convicted for abduction of Zavadski, two of them sentenced to life in prison, one of them – to 25 years imprisonment, one – to 12 years in prison. The alleged masterminds of this crime were considered to be the former head of the national Security Council, Viktor Sheiman, the then-head of the Ministry of Internal Affairs, Yuri Sivakov, and a former security officer in the interior ministry, Dmitriy Pavlichenko.

In 2004, the Parliamentary Assembly of the Council of Europe adopted a resolution stating that the “information gathered by the rapporteur leads it to believe that steps were taken at the highest level of the state to actively cover up the true circumstances of the disappearances, and to suspect that senior officials of the state may themselves be involved in these disappearance.” The Parliamentary Assembly demanded that the Belarusian government conduct an independent investigation into the role of then-General Prosecutor Sheiman, thenMinister of Sports Yuri Sivakov and Dmitriy Pavlichenko. The demand for the authorities to disclose the truth about Zavadsky’s disappearance has been consistently included in resolutions of the UN Human Rights Committee and the OSCE Parliamentary Assembly.

Starting from October 24, 2001 four people (V.Ihnatovich, M.Malik, A.Huz and S.Savushkin) were on a closed trial for the abduction of Dzmitry Zavadsky. The barrister who represented Zavadsky’s mother solicited the judges to hold a public trial session, but it was rejected. All the inquiries of Zavadsky’s family to receive the testimonies which had been sent by the barristers of Zavadsky’s family were turned down. On March 14, 2002 four persons were sentenced to long penalty terms for the abduction of Dzmitry Zavadsky (but not for the murder, as the body had not been found) among other things, on the basis of the digging tool with blood of Zavadsky, which had been found in Ihnatovich’s car. Valery Ignatovich and Maxim Malik were sentenced to life imprisonment; Aliaxey Huz and Siarhey Savushkin were sentenced to 25 and 12 years in prison respectively. It was reported that the convicts kept pleading not guilty, calling the legal trial a farce. According to the words of one of the barristers of Zavadsky’s family, former General Prosecutor Oleh Bozhelko was a witness for prosecution at the trial, but he refused to give evidence referring to the regulation of Criminal Procedure Code which allowed the investigator to defend their sources of information.

On March 31, 2006 the case was suspended again with the common statement “because of failure to find the vanished person.