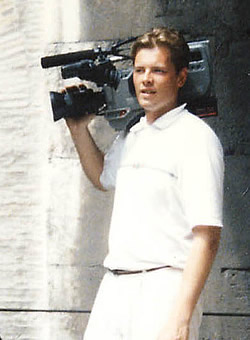 Dmitry Zavadsky was born on August 28, 1972. From 1994 to 1997 he worked as personal camera man of president Lukashenko. Since 1997 worked as camera man at Russian Public Television (ORT). In the spring of 1997 he and ORT reporter Pavel Sheremet were arrested for making a report about the vulnerability of the Belarus-Lithuania state border. Dmitry Zavadski was given a suspended sentence of one and a half years in prison. He worked in Chechnia from October 1999 to May 2000 where, together with Pavel Sheremet, shot the “Chechen Diary” documentary for the ORT. On July 7, 2000 on his way to Minsk-2 Airport he mysteriously disappeared.

The abduction case of Dmitry Zavadsky is officially regarded solved. Those convicted were officers of the Ministry of Internal Affairs (MVD) special Almaz squad Valery Ignatovich and Maxim Malik (both sentenced to life imprisonment), former MVD Academy cadet Alexei Guz (sentenced to 25 years in prison) as well as Sergei Savushkin, individual with three convictions on record (sentenced to 12 years in prison). All verdicts were passed in closed court sessions. No evidence of involvement of those convicted of abduction of Dmitry Zavadski was presented to general public. All of them pleaded not guilty. The investigation failed to find the body of the disappeared journalist.

According to public opinion Zavadsky’s case indictment and court hearings were fabricated to stop the reverberations caused by the abduction. The turned unwanted individuals who earlier perpetrated numerous crimes as ordered by the authorities were put behind bars, even though they were not involved in Dmitryi Zavadsky’s disappearance. The real masterminds of this crime are considered to be head of president’s administration Viktor Sheiman, former head of the Ministry of Internal Affairs Yuri Sivakov and MVD special SOBR squad commander Dmitry Pavlichenko.

In 2004 the Parliament Assembly of the European Council adopted a resolution demanding from the Belarusian government an independent investigation of Dmitry Zavadsky’s case and discharge of Viktor Sheiman, Yuri Sivakov and Dmitry Pavlichenko.

The demand of disclosing the truth about Dmitry Zavadsky’s disappearance has been persistently included into resolutions of the UN Human Rights Commission and OSCE Parliament Assembly. Minister of Internal Affairs Vladimir Naumov, head of presidential administration Viktor Sheiman, former MVD chief Yuri Sivakov and SOBR commander Dmitry Pavlichenko are banned from entering the U.S. and European Union countries for their likely involvement in Dmitry Zavadsky’s disappearance.