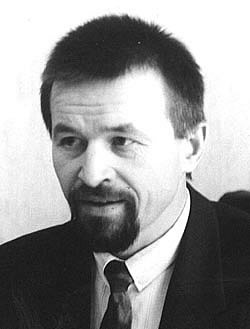 Anatoly Krasovsky was born on May 17, 1952 in the town of Krupki of Minsk Oblast. He studied physics at Belarusian State University. Professor, candidate of Philosophy, author of dozens of scientific works and a number of student books, creator of the school course “Ethics and Psychology of Family Life”. In the early 90s he turned into an important entrepreneur and publisher of popular magazines Ya&Ya, Ideal and others. He was involved in charity work, rendered financial assistance to a number of Belarusian social organizations, including ones politically non-engaged. He was known as a personal friend of deputy chairman of the Supreme Soviet of the 13th Convocation Viktor Gonchar, Belarusian opposition leader of the late 90s.

1999 was a year of bitter confrontation between the Lukashenko regime and opponents of the imposed by him on the 1996 referendum new version of the Constitution that fixed among other things a new date for presidential elections. Political forces that did not recognize the modified by Lukashenko Constitution and his claims to remain in office until 2001 had an unwavering purpose in the course of the struggle against the regime to hold the elections in 1999 as was predetermined by the first Constitution of independent Belarus.

A considerable number of Lukashenko’s opponents closed the ranks around the Supreme Soviet of the 13th Convocation. Before the 1996 referendum that dissolved this supreme legislative body of the country, the Supreme Soviet did not represent specific political views. It embodied the Law and was a serious obstacle for Lukashenko to gain unlimited power. Thus, the Supreme Soviet of the 13th Convocation denied Lukashenko’s demand to extend his term in office to seven years and modify the Constitution to extend power of the executive branch. The 1996 referendum initiated by Lukashenko in order to crush the resistance of the legislature was held with violations incompatible with fundamental legal regulations. Since then Lukashenko perceived the figure of Mr. Gonchar, deputy chairman of the Supreme Soviet, as his direct political rival.

The danger for Lukashenko posed by the activities of the opposition that in 1999 fixed the purpose of alternative presidential elections had nothing to do with stripping him of the prolonged term in office. The opposition had an effective instrument to destroy the Lukashenko regime as a house of cards. To hold presidential elections ignoring the imposed version of the Constitution meant to catch the regime on the spot of its first grave crime, to publicly prove the illegitimate nature of its rule. Lukashenko was aware of this danger precisely because the 1996 referendum was designed by him as a means of absolute usurpation of power in the country and a guarantee of perpetuation in office. Therefore the solidity of the danger for Lukashenko posed by the political forces united with the Supreme Soviet of the 13th Convocation cannot be overestimated.

The arrest of Anatoly Krasovsky in August 1999 became a first signal of extreme discontent of the authorities by his political activities. The entrepreneur was placed into a detention center where he de facto faced charges of subversive activities. However, after some details of the incident leaked into a number of mass media the Investigations came up with another version according to which Mr. Krasovsky failed to pay up on time a credit given by the Poisk Bank. It did not take a long time before this charge fell to pieces because of its evident inconsistency. In a week’s time the entrepreneur was released together with other detainees on this case, including the Poisk Bank President Ms. Valentina Surina. However in order to get released Mr. Krasovsky had to pay a bail of $102,000.

The tragedy was set to happen on September 16, 1999. In the afternoon of that day Anatoly Krasovsky and Viktor Gonchar were abducted. The law enforcement agencies started investigating the case; however all known to date evidence has been collected by volunteers. That includes windscreen fragments of Mr. Krasovsky’s car used by the friends that day found on Fabrichnaya Street in Minsk, traces of blood identified as Mr. Gonchar’s by an independent expert examination. These and other evidence clarify the details of the abduction and are recognized by general public as a proof of direct involvement of security services. The official investigation, despite the fact of permanent surveillance over Viktor Gonchar and Anatoly Krasovsky conducted by the KGB, announced that the case could not be solved. After Mr. Gonchar and Mr. Krasovsky disappeared the KGB issued a statement claiming that surveillance was suspended precisely on September 16.
In June 2001 the testimonies of KGB investigators Petrushkevich and Sluchek became known to the world community. They told some details of the system of physical removal of the unwanted in Belarus that has taken shape since Lukashenko came to power.