Irina Krasovskaya: To find the truth about political disappearances in Belarus

Workshop on Enforced Disappearances in Asia: Existing Law, Challenges and the Way Forward

Dear Friends, I am very happy to be here today. I am also excited to see my friends from Nepal, Philippines, Kashmir, Pakistan, Laos, Thailand, Sri Lanka, Timor-Leste, El Salvador and from many other places where disappearances occurred in the past and still continue today. It is a privilege to be here among people who understand what disappearances are and how important unity and solidarity are in the search for truth and justice.

Enforced disappearances are not exclusively phenomena of Asia or Latin America. Disappearances have occurred in throughout European history and are still happening in Europe: Spain, Balkans, Euro- Mediterranean region, Caucasus – we still have thousands unsolved cases of disappearances.

I am from a part of Europe called the post-Soviet world. I am from Belarus, a country which is situated between Russia and Poland and which like neighbouring countries was a part of the USSR. And like other countries in this region Belarus became independent after the disintegration of Soviet Union in 1991. Fifteen countries became independent but the problems which created the problem of disappearances did not vanish together with the collapse of the Soviet Union. Our region is dominated by ethnic divisions, territorial disputes, outright wars, and many forms of conflicts. And, of course, undemocratic governments are everywhere.

In Russia, there are thousands of disappeared in the Republics of Ingushetia, Dagestan and Chechnya. In Chechnya human rights groups estimate that between 3,000 and 5,000 people have “disappeared” since the beginning of the conflict in 1999. Most of them are believed to be buried in several dozen mass graves. All of these people are either civilians or were otherwise unarmed when taken into custody.
In Ingushetia my friend Magomed Mutsolgov set up his own human rights organization, Mashr (Peace) when his brother disappeared, and over the last years has collected information about 227 cases of abduction and enforced disappearance which have occurred since 2002.
Ukraine – is another country where we should be concerned about growing abductions and disappearances since the conflict with Russia, started in 2014. Up until then Ukraine had only the case of famous journalist the Georgy Gongadze who disappeared in 2000. Several Ukrainian governments tried to solve the case and the perpetrators were arrested but there are still no names of those who ordered to the killing of the journalist. And now in Ukraine there are hundreds of victims which were abducted by both sides in the conflict. Official records count around 1600 people whose fates are unknown.

In Belarus all disappearances have happened because the dictator did not want to lose his hold on power. The illegitimate president of Belarus has been in office for almost 25 years – despite the fact that the Constitution allows the president only two terms. And this explains why there are political disappearances in Belarus.

All political disappearances happened in 1999-2000 just before the second presidential election. The election of 2001 was to become the turning point for democracy in Belarus. The political killings turned out to be the first step in establishing a dictatorship. Kidnapping and killing the opposition politicians allowed President Lukashenko to monopolize power and turn what was a promising Belarus into the last dictatorship in Europe.

One of the disappeared in Belarus was my husband. This was not the first political disappearance in Belarus, and unfortunately not the last one. In May 7th, 1999 Yuri Zakharenko, General and former Interior Minister, leader of opposition Unit of officers, was kidnapped while going home after parking his car. On September 16th, Victor Gonchar, former Vice Speaker of Parliament, former Chairman of Central election committee, and my husband Anatoly Krasovsky , a businessman who financed the opposition, were blocked in their car and taken away by unknown people. On July 7th, 2000 Dmitry Zavadsky, a journalist and former private camera man of the Belarusian president was kidnapped on his way to the airport.

It had happened almost 20 years ago. Since then we have been fighting for justice. Our activity to find truth and justice for our loved ones and for ourselves includes, first, using all possible legal instruments inside Belarus and outside and, second, creating a public awareness campaign.

Of course, inside Belarus with the help of our lawyers we tried to use legal procedure. We sent hundreds and hundreds of requests, demands and questions to the investigators and their supervisors. But officials rejected almost all of our petitions, which were aimed to bring to light our procedural rights (including the criminal prosecution of the suspects) without any grounds and they did not carry out any of the investigations we asked for in our petitions.

In 2004 famous investigative report and resolution “Disappeared persons in Belarus” conducted by the Parliamentary Assembly of Council of Europe said that “a proper investigation of the disappearances has not been carried out by Belarusian authorities”. And “… the information gathered by the rapporteur leads it to believe that steps were taken at the highest level of the state to actively cover up the true circumstances of the disappearances, and to suspect that senior officials of the state may themselves be involved in these disappearances”. In the report concluded (and this is very important) “… it hard to believe that the above could have taken place without the knowledge of the President”. This explains everything.

In Belarus legal instruments for justice in cases of enforced disappearances cannot be used successfully because there is no political will to solve those cases. The same people who are suspected of organizing the crime are still in power. The President’s orders have more power than law. Victar Sheiman, the main suspect in orchestrating this crime and a close ally of the President, was appointed as the Head of Administration of the President after being a Prosecutor General. Then he was promoted to Secretary of Security Council of Belarus, then the Head of department of Presidential Affairs. The same people have been in power for 25 years.

During these years the Investigation Committee of Belarus used a tactics which allow them not to share any information about the investigation. Every three months they sent to relatives a short letter saying that the time of investigations has again been prolonged for another three months. It means that by the law they can hide behind the secrecy of investigation. But in November 2018 all cases were suspended owing to a failure to identify the person to be charged.

The apparent failure of the Belarusian authorities to investigate the whereabouts of the four prominent Belarusian disappeared men has drawn sustained international criticism from the international institutions like the Parliamentary Assembly of the Council of Europe (PACE), the Organization for Security and Cooperation in Europe (OSCE), the Inter-Parliamentary union (IPU), the United Nations Committee against Torture, the United Nations Working Group on Enforced and Involuntary Disappearances and UN Human Rights Committee.
Unfortunately, the Belarus government reacted to the resolution and decisions of international organizations the same way they reacted to the demands of the relatives of their victims.

We did not have success on a local level. But we had more results using only possible for Belarus international legal mechanism – UN HRC. My daughter and I won the case against Belarus in UN HRC established under the International Covenant on Civil and Political Rights. In April 2012 The Human Rights Committee concluded that Belarus had violated its obligation to investigate properly and take appropriate remedial action regarding Mr. Krasovsky’s disappearance (violations of article 2, paragraphe 3, read in conjunction with articles 6 and 7 of the Covenant). HRC requested Belarus to provide the victims with an effective remedy, which should include a thorough and diligent investigation of the facts, the prosecution and punishment of the perpetrators, adequate information about the results of its inquiries, and adequate compensation to the authors. The family of other disappeared person Yuri Zakharenko won their case in 2017.

But again, the Belarus response was that they do not recognize Committee’s rules of procedure. This means that no one single judgment of UN HRC under ICCPR won by citizens against Belarus (all together 120 cases) was acted on by the Belarus state, even Belarus signed Optional protocol and therefore has to fulfill its legal obligations.

In 1999 when my husband disappeared, I just wanted to find him. Later when we understood that there will not be justice in Belarus without international support and solidarity, we created a civil initiative called WE REMEMBER. It is an independent public organization which affiliates family members and friends of victims of political kidnappings occurred in Belarus.
Our mission was to disseminate truthful information about politically motivated disappearances of Belarusian citizens and informing the world community about the situation in the country.
We participated in hearings in the Parliaments of other countries: Russia, Poland, Lithuania, Estonia, and US Congress. And we generated serious resolutions. We met with presidents, ministers, human rights defenders, writers, artists, journalists all over the world and told them our stories. And we received support from famous world leaders.

We cooperated closely with International organizations : Parliamentary Assembly of the Council of Europe (PACE), the Organization for Security and Cooperation in Europe (OSCE), the Inter-Parliamentary union (IPU), the United Nations Committee against Torture, the United Nations Working Group on Enforced and Involuntary Disappearances and UN Human Rights Committee. And we got numerous decisions and demands for Belarus to solve the cases.

Today we still do not know what happened to our loved ones or where they buried. The perpetrators have not been punished. Belarus is still not going toward democracy.

But at least we have some achievements which help us to believe in the future:

– No more political disappearances occurred in Belarus after 2000;
– Two families won the cases again Belarus in UNHRC. One day Belarus will fulfill this decision.
– Those four high ranking officials suspected in organizing disappearances of political opponents were put on visa ban lists in EU, USA, Canada and many other countries in 2004.
– And we received a lot of attention from world politicians and governments on the cases of disappearances and human rights violations in Belarus.

For all these 20 years of struggle for justice I understood one very important thing – only in solidarity we are strong. Almost eighteen years ago I was introduced to international organizations of families of disappeared such as AFAD , FEDEFAM, FEMED , then I met people from Nepal, Bangladesh, Kashmir, Pakistan, and others to whom I am extremely grateful for sharing their experience and involving us in a wider struggle not only for our families or our country but for every person in the world and their right not to be disappeared
Today our organization WE REMEMBER is a member of the Steering Committee of International Coalition Against Enforced Disappearances and actively participates in the international campaign to protect all people against political disappearances. The best result of the work of organizations of families of disappeared and NGOs from all over the world as well as journalists, lawyers, our supporters is that the International Convention for the Protection of All Persons from Enforced Disappearance which entered into force on December 23rd, 2010. And a Committee of Enforced Disappearances was created to help us to fight against impunity. It gives us a hope.
And I have a hope that one day I will find the grave of my husband.
I hope that all my friends here will discover the fate of their beloved.
I hope that one day we will achieve what we are fighting for – a world without disappearances.
Thank you for your attention. Thank you very much for your support. 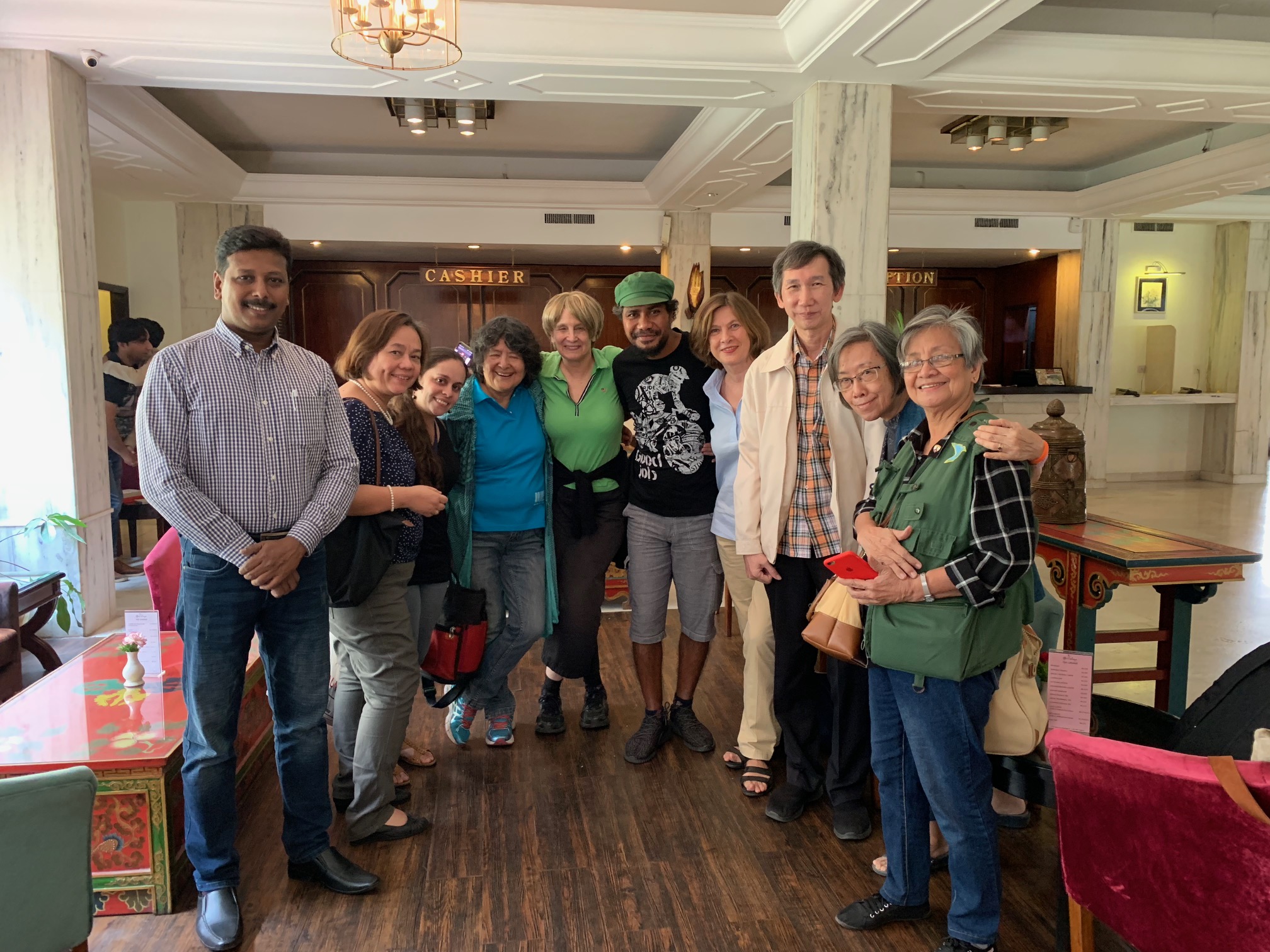 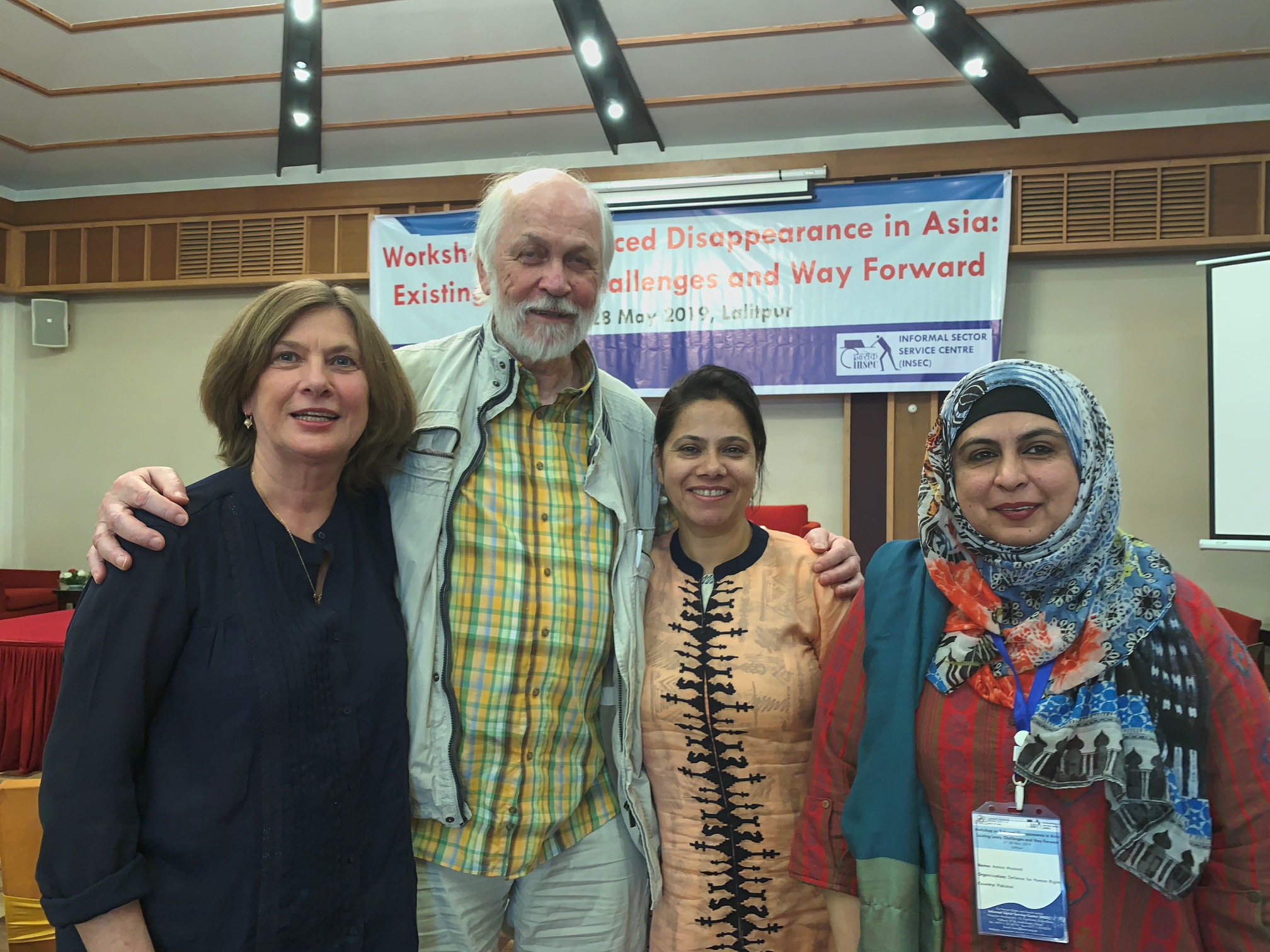 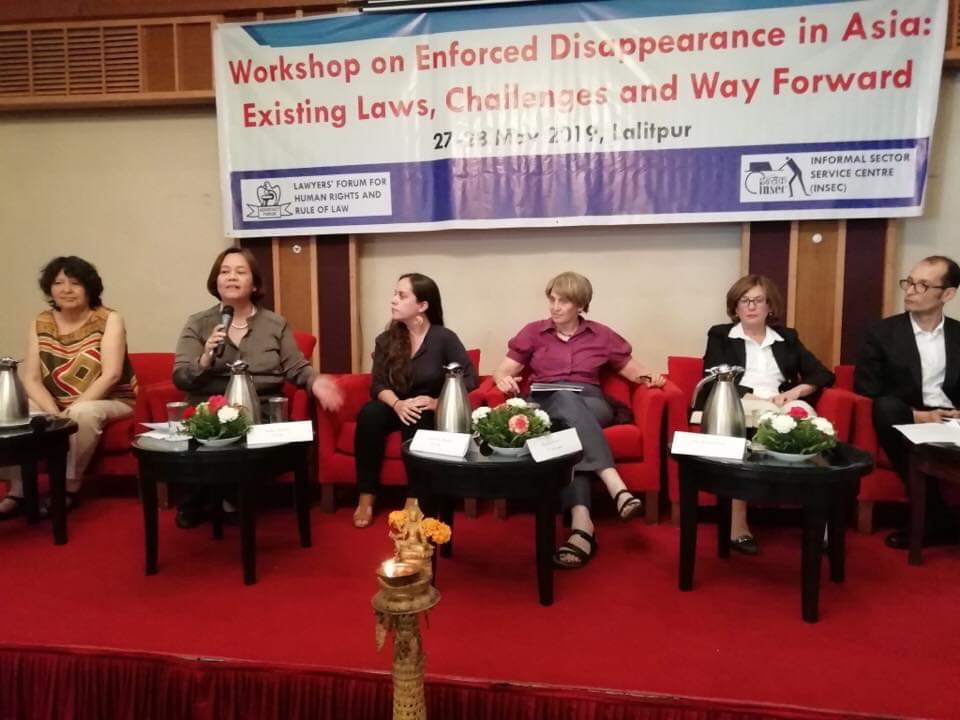 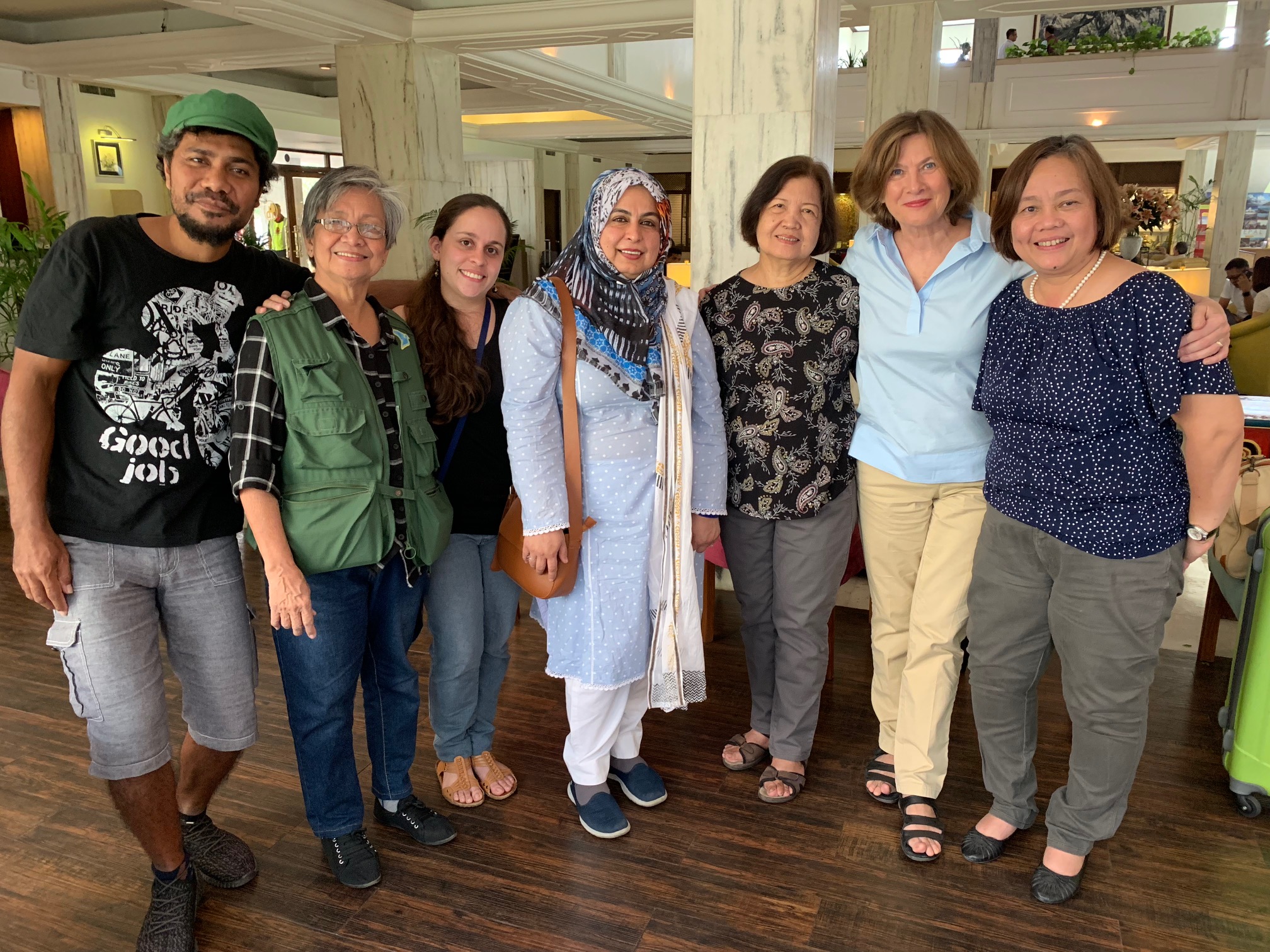